The title track from one of Vic's most celebrated albums is bittersweet for me today. Mark Linkous, of Sparklehorse fame, committed suicide this past weekend, in Knoxville, TN. Not only was he a fantastic musician, an artistic genius, and one of my favorite all time performers, but he did a amazing cover of West of Rome, for the Sweet Relief 2 compilation.

Ironically, the last time I ever saw Mark, he and Vic and I were chatting about this specific track.
It was in Asheville, NC. I had mentioned to Vic that it was the only song off of the album West Of Rome that I had never heard him perform. He told me that he hadn't played the song in years, but would try and work out an arrangement. At that point, Mark very humbly offered that if I wanted t

o hear a 'terrible' version that he had one on the Sweet Relief compilation. I sort of laughed and said that it was a fantastic cover and that it was my favorite track on that specific album. Afterwards, Mark and I sat together and watched Vic perform his magic. That was February 2009.
I never saw either of them again after that night.
West of Rome was inspired, but not directly, by the book of the same name by John Fante. The book, which features two novellas, is about a father's reflections on his own life and that of his children. Vic read the book and then wrote the song. The two have only that relation. Also, despite thoughts to the contrary, the song is not about Rome, Georgia, although Vic had mentioned that is could have been because it has some Georgia imagery in the lyrics.

Speaking of lyrics, West of Rome has some of Vic's most narrative lyrics. The scene is set, from the first line, and in just five minutes, Vic has presents an interesting character study of the protagonist, and his environment. Lines like "a childhood of dry goods and wet neglect" and "polishing his boots and pummeling his liver" are so simple yet descriptive. Just another facet of Vic's incredible talent and ability.
I miss him still. In fact, I miss them both. 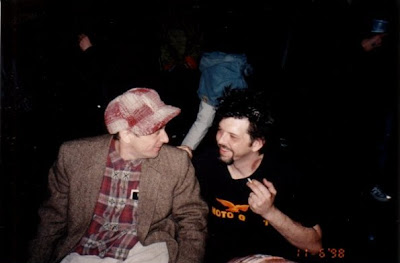 And Mark's from the Sweet Relief 2 Tribute

west of Rome, just east of the border

in a static-y ramada inn

polishing his boots and pummeling his liver

steeped in the dark isolation

just what business does he have around here

credentials are wearing out with each little bit of cheer

brushing his teeth and milking his ulcer

preparing to waste another wily morning

stroking himself and them phoning up his sister

yes a childhood full of dry goods and wet neglect

the father they now sponge off they have no absorbing respect

yes he's a glad boy to have such a void

from his cozy cottages just west of Rome

yes its a sad state for great suffering

Posted by Charles Fontaine at 11:43 AM