Vic's debut, 'Little' will always hold a special place in my heart. To me, it's the truest representation of what his music was all about, especially compared to some of the more polished, ensemblic albums that came later. The fact that Vic's final album 'Skitter on Take-Off' hearkens back to the formula of this debut speaks to that thought. The simplistic, yet powerful introduction to Vic's music is very defining... not only the sound that Vic was looking for at the time, but also the man that he felt he was.


Prior to this solo venture, Vic was a member of several bands in the Athens and surrounding areas...including Random Factor, Angle Lake, The Screaming IDs, Mr. Greenjeans and most notably The La Di Das. That band was known for its raucous, unruly, punkish, drunken rock and roll. Vic played keyboards and provided lyrics to the group. Unfortunately (or fortunately), the La Di Das style didn't suit Vic's intention for his music..it was just too raw. His thought process of the time was that 'troubadourish' music was heavier than punk rock, and subsequently that's why his debut album is titled 'Little.' His philosophy that 'quiet and little' could be more powerful than 'brash and loud' was something that Vic was intent on conveying and he left The La Di Das in pursuit of that idea.

It's a common story about Michael Stipe seeing Vic play during his weekly residency at the 40 Watt club. Michael then deciding that what Vic was doing at the time needed to be documented. The album was recorded on October 6th, 1988, and twenty-one tracks were laid down. Ten tracks were released as 'Little' in 1990.


Pitchfork Media once reviewed the album and called it "the most elemental of any of Chesnutt's albums...As its title suggests, 'Little' is about Chesnutt's Pike County childhood, a theme he would return to repeatedly as if thumbing worn and creased snapshots found at the bottom of a drawer." This is a pretty accurate assessment of Vic's debut. It's an album seeped in the charm and nostalgia of his Southern Gothic upbringing.

It's a well known fact that Vic was adopted. He addressed that experience several times during his career, including on this album (Gepetto), but by all accounts, he had a normal, Southern childhood, with loving parents. During his formative years, Vic was a little overweight, and as was the way for most heavy kids in elementary school, Chesnutt was ridiculed by his fellow students and constantly got into fistfights.

"I was a fat little kid. I didn't have but one friend for years."- Rolling Stones Magazine, September 1996

That one friend was Danny Carlisle.


Danny was a special needs child who befriended Vic and who constantly followed him around. He truly was Vic's only friend. As the story goes, one day after class, and as a direct result of teasing by his classmates, an altercation between Vic and Danny occurred.  As a result Vic became even more of an outcast because he beat up the 'retarded' (Vic's words) kid.

With 'Little', Vic was able to address such issues from his childhood and reinvent himself in the process. Danny Carlisle is not a direct representation of that poor kid from Vic past, but more of a way to address current social issues and how to deal with his life in general.

"Danny Carlisle was based on this kid I beat up once ‑actually, he's based on a combination of characters. I was sitting on my porch in Athens one day, tripping on acid and thinking about this guy. At the time, I was hanging out with these activist‑type people, obsessing over left‑wing politics. So when I wrote, 'Danny Carlisle don't care about the contras,’ it's like I was wishing that I was Danny Carlisle, who didn't have to deal with the stuff I was dealing with. I was horny and shit, and I was just wishing that I would just shut the fuck up about it and be like Danny Carlisle." -Rolling Stone magazine, September 1996.


When being interviewed in 2009 by David Harris, for the Spectrum Culture website, Vic speaks directly about the songs on 'Little' and his thought process about the lyrical content of this song in particular...

David Harris-Let's move on to "Danny Carlisle." This one seems like a narrative of a boy who lives in his head. He's picked on by others. Then he goes to war in Central America or something?


Vic Chesnutt- No, not at all. This is a little boy song in a way. This is what we did as kids. We would hide in the woods and play tree fort and shoot each other with BBs.

DH- It is a little boy song, but then you have the two lines about not giving a shit about the contras and he would rather dream than fuck which are total adult elements.


VC- Right, right. He is an adult now. This kid is an adult now and he doesn't care about these things. The tree fort is the way things used to be for him, when he was a kid. Now he's an adult.

DH- When you say, "And when he raised his eyes to heaven as a soldier," do you mean when he was a child soldier playing in the woods? 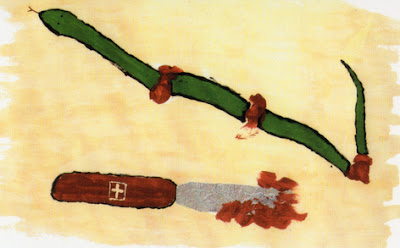 DH- Is that based on something you did as a child?

VC- I don't ever remember actually doing something like that, no. I mean, I'm sure I cut snakes up. I didn't think I was killing the evil snake though.

DH- Are we talking about the biblical snake here?

VC_ Some people in the South, they actually think snakes are the devil. It's understandable. Snakes are scary things. Farmers and old-timers thought they were the serpent and the devil that came from Adam and Eve. Little kids can see snakes as evil.

DH- Remember, I am coming into this with a Yankee sensibility since I grew up in the North.

VC- Yeah, well y'all ain't got snakes up there?

DH- We do, but we have them as pets. The only thing I ever cut up was slugs. So were you the kid that was picked on or were you the one shooting the people?

DH- What happens to someone who is picked on a lot when they grew up? It sounds like Danny Carlisle is living in his head.

VC- Yeah, he is living in his head. I am not this kid. I am not Danny Carlisle.

DH- Is he based on someone you know?

DH- The one line "he would rather dream than fuck" is a pretty strong line when mixed with childhood memories of jumping off bike ramps and tree houses. The Contras line really does give it a timestamp.

VC- Oh, it's a timestamp. There's no doubt a-fucking-bout it, man. This is a fucking timestamp. I can't do it now because it's so dated. I never do it. But at the time it was one of my greatest songs.

VC- I don't know. I don't play many of these songs. That was one of my greatest songs.

DH- Why do you feel that way?

VC- It's just so heavy. When you hear it, you don't really know what's going on. It takes some thinking about it to put the pieces together. As it's going by, surprising things are said. It's kind of engaging. If you hear me do it, it's kinda like, "What's going on here?" It's one of the greatest songs.

I agree with Vic. Along side Isadora Duncan, Danny Carlisle may be Vic's greatest early work. Despite that fact, and also that it was a fan favorite, the song didn't get performed much after 1995. There were occasions when the crowd would call for it, of course, and at a very special show in Seattle, Vic invited a fan up to sing the words. He commented that the lucky fan "did good." 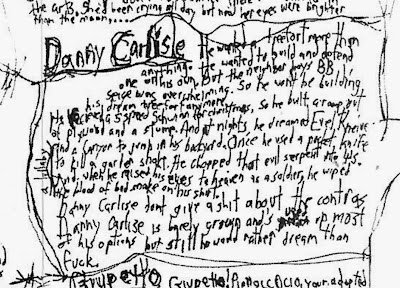 And a canyon to jump in his backyard.


Danny Carlisle don't give a shit about the Contras.
Danny Carlisle is barely grown and he's used up most of his options
But still he would rather dream than fuck.

Once he used a pocket knife to kill a garder snake
Yes he chopped that evil serpent into fours
And when he raised his eyes to heaven as a soldier
He wiped the blood of bad snake on his shirt.

Danny Carlisle don't give a shit about the Contras
Danny Carlisle is barely grown and he's used up most of his options
But still he would rather dream than fuck.


Here's the studio cut from 'Little.'

A very rare demo recording from the mid 1980s.

And the last known performance with Kurt Wagner (from Lambchop) from Barbican Hall, London- November 3rd, 2001 (Taken from the "Sloppy Satori: The Best of Vic and Lambchop" compilation.)

Here's a link to a children's book loosely based on 'Danny Carlise' by Illustrator Berjan Podde. It's called 'Rupert' and is completely in Dutch.