When I started this blog a couple of years ago, the intent was to focus on not only Vic's music, but also his art. Although Vic never considered himself an artist he most certainly was and his unique style and approach makes his art as recognizable as his music. 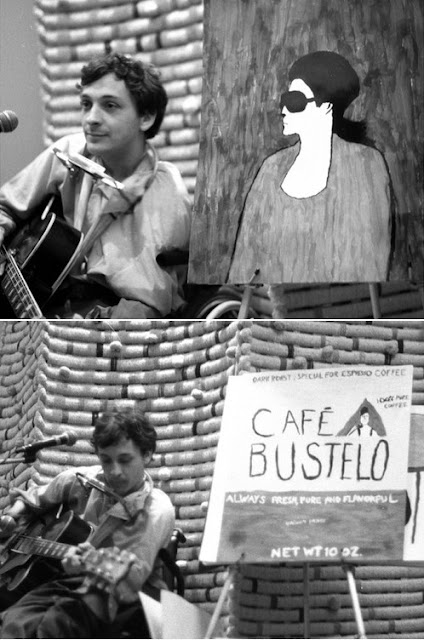 "I ﬁrst started painting on poster board to illustrate songs for use as visual aids on stage. But when lots of people asked if they could have them, I was encouraged to branch out. I feel like I paint like a little kid. And for the same reasons—because it’s fun. My skill level is like that of a kid, I think. Mostly I paint symbolic ﬁgures in action to convey some sort of humor and poetry.

The sensation of painting is different from playing music, but it’s hard to describe. The visual feedback is magical, spreading colors where there was blankness is thrilling to me. Also, I ﬁnd painting is a kind of muse re-setter. If I’m uninspired, I can sketch out a ﬁgure with a sword or ﬁshing rod in its hand and suddenly, my creative spark is clicking again. And where sometimes the pressure to write heavy, moving songs can be stiﬂing, painting is free and exhilarating." 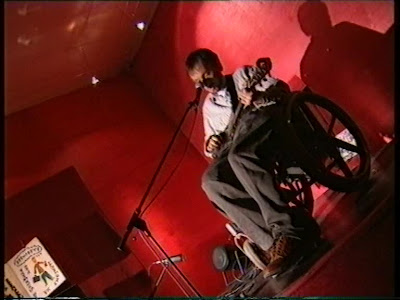 In addition to the visual aids that Vic used on stage early in his career, he also often created (or designed) his own album covers. This allowed the work to remain a complete representation of the mood and feeling of the album. He also, reluctantly, would show his paintings, or drawings, in exhibitions. Sadly, unlike another singer cum painter, Daniel Johnston, there are scarce few representations of his work to be found in public forums. Vic's ability with a pen was of course limited due to his handicap, but nevertheless, his approach to line work was as interesting as his approach to syllables.

In an interview for New Stateman, Vic was asked about art and his take on it.

Does art make a difference? At the very least it makes a huge difference to the artist. But rock'n'roll changed the world - so did hip-hop.
Should politics and art mix? Politics and art are mixed. Art developed and exists as it does today because of political patronage. From cave paintings and Stone Age Venus figurines to classical architecture, Byzantine church mosaics, Renaissance masterpieces and the entire National Portrait Gallery . . . it's all political propaganda. Then there is art as populism: Guernica, Goya, Mark Twain, Bob Dylan's "Masters of War", M*A*S*H. In the beginning, rock'n'roll was by its very nature political, populist propaganda.
Does money corrupt an artist? Not if they are rich already. And frankly, sometimes when money and artists mix, great things happen. Of course, a hungry artist is very different from a sated one.
Is your work for the many or for the few? Um, have you ever heard my music? I would say 20 years of doing my thing has proven it's for the few, no matter what be my wishes or pretensions, ha!
Which artist do you most admire? To write it down seems strange and I tried hard for a long time, especially in the beginning, to resist his charms, but dammit, I think Basquiat is my favourite painter.


I too am a fan of Jean-Michel Basquiat. His post graffiti, neo-expressionist style, coupled with his love for words and the dichotomy of life makes him a favorite of mine. I can understand Vic's affinity for his work, and honestly, a similarity in styles between the two.

During an interview for a German documentary on his music and art, Vic said...

"I don't want people to think... "Oh! He's a musician so he thinks now that he's a painter too." I didn't want to do this. They MADE me do this. For maybe 10 years I've been drawing a little bit...painting and drawing. It's quite fun for me, and I don't take it very seriously. And, um, it's good for my mind, you know. I can clear my mind. It's like meditation in a way. I get messy like a little kid, you know? It's like playing with paints, you know. It's quite fun."


Vic's art is playful, yet very engaging. He may not have taken himself seriously as an artist, but his work stands up surprisingly well, and his creativity is quite advanced. His paintings are far more involved than his drawings, understandably, yet both still feel like they come from the same hand.  I really with that there were more representations of Vic's creative outlets, because I am fascinated by his view of life.

Here  is an small assortment of Vic's non-commercial work.

One of Vic's artistic heroes was Philip Guston.

Philip was a Canadian transplant who established himself among the 'New York' school of abstract expressionism during the 1950s. Much like Vic's musical career, Guston changed his style from the simplicity of abstractism to a more subtle representational art and even later to a stylistic, cartoonish approach. Vic's admiration was probably due, in part to, the fact that Philip was often a tortured, complex soul, painting his world in a way that confronted his demons and allowed for some sense of empowerment. I can't help but feel that Guston's story made sense to Vic and as a result. Vic empathized and ultimately had to be drawn to his work.Vic made a habit of naming his songs after people whom he admired, or at least intrigued by (Lucinda Williams, Steve Willhoughby, Zippy Morocco, Lillian Gish, etc) and so his admiration for Guston is obvious.

The song itself stands out as a tour de force on an album that includes some of Vic's strongest compositions.  The song's brash, chugging rhythm, off-set by the simplistic lyrics is in such deep contrast to songs like 'Coward' and 'It Is What It Is" that it can't help but stand out.

Speaking of the lyrics, here's Vic's take on their meaning...

"This song is called Philip Guston. I love this painter. All the lyrics...you see I think Pitchfork accused this song of being...stupid. All the lyrics come from Phillip Guston. Either words on his paintings or titles of songs. It's a heavy song - they're fucking idiots."

What Pitchfork actually said was this...

"...the lyrics of "Philip Guston" are quite minimal, serving as a bit of seasoning for a broken-down violin and guitar jam."

Regardless, both Vic and Pitchfork are correct. It is a heavy song, seasoned with minimal lyrics and, in essence, the opposition of the two styles works surprisingly well. I often prefer the live representations of Vic's songs over the polished studio tracks, and in this case, the live version is (in my opinion) VASTLY superior. Unfortunately, 'Philip Guston' was performed only a handful of times, and almost symbolically, Vic's final performance is the greatest version of this song available. Vic stretches out the words, and you feel as though he is just on the verge of cracking when he sings the lyrics. His 'line variation' of the word 'line' is worthy of being remembered as one of his greatest onstage moments.