On June 15, 2004 , when New West Records re-released Vic's first four albums in expanded form, some of Vic's most inspired (albeit unreleased) work was finally available for the masses... namely  Confusion, Parameters, Elberton Fair and the long lost masterpiece Nathan.

Peter Sillen's short film about the making of 'West of Rome' called "Speed Racer: Welcome to the World of Vic Chesnutt" featured a short, live rendition of both Nathan and the song Flying... another lost masterpiece. Nathan was written and recorded during that period right after Vic left California (he had moved there from Athens following the recording of Little) and moved back to Georgia. By all counts, this was an incredibly creative and fruitful period in Vic's life.


In the liner notes for the re-issue of 'West of Rome' Vic's annotation for Nathan simply says 'Inspired by the Kafka Diaries.'


Simple enough, right? Well, not really. Franz Kafka's diaries were written between 1910 and 1923, in German, and in an attempt to spark creativity for his other writings, focused on philosophy, dreams, observations, lore and feelings. They are an interesting and daunting read, and as a whole contain a lot of info and fodder for Vic to absorb.
So, where did the narrative for Nathan actually come from? The protagonist of the story, Nathan, reflects back on the remembrances of  his relatives, while visiting an old, abandoned homestead. The lyrics are heavy, and evocative and rife with the history of this family. There's sickness, death, unhappiness, shame, hardships, heartbreak, piety and tradition. It's a heavy song... and it's all based on one specific writing by Kafka.

"My Hebrew name is Amschel, after my mother's maternal grandfather, whom my mother--she was six at the time of his death--remembers as a very pious and learned man with a long white beard. She remembers how she had to hold on to the toes of the corpse while asking his forgiveness for whatever wrongs she may have done him. She remembers her grandfather's many books lining the walls. He bathed in the river every day, even in winter, when he had to chop a hole in the ice. My mother's mother died before her time of typhoid fever. Her death so affected the grandmother that she became melancholy, refused to eat, spoke to no one, and, one year after her daughter's death, went out for a walk and never returned; they pulled her corpse out of the Elbe River. Even more learned than my mother's grandfather was her great-grandfather, equally renowned among both Christians and Jews. Once, during a conflagration, his piety worked a miracle; the flames spared his house while devouring all the others around it. He had four sons; one converted to Christianity and became a physician. All of them died young, except for my mother's grandfather. He had one son, whom my mother knew as Crazy Uncle Nathan, and one daughter, my mother's mother." 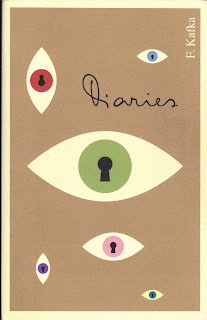 So, in this one passage from Kafka, dated December 25th, 1911, lies the catalyst for one of Vic's greatest songs.

Vic said it best... "It was like I was writing a movie for this little faith ya know? Like I was writing for this, um, for this passage,  very short passage in Kafka Diaries....(it's a) quality song. One of my favorites."

And whether or not Kafka found his own inspiration in the scribblings of his diaries, we'll never know. What is known is that Vic had a special way of taking the most generic of passages... basically a dry, stale, piecemeal account of a man's family history and making it his own, and in turn recording what I consider one of his greatest, long-lost tracks.

Nathan was given live airings dozens of times between 1991 to 2006. It was first demoed as a just a simple solo Ukulele song and then later recorded as a three piece with Vic again on Uke, Tina on bass, Jeffrey Richards on drums (as 'Little Sharpie'.) It was performed during the mid-90's with the 'Scared Little Skiffle Group' (featuring Tina on bass, Jimmy Davidson on drums and Alex McMcManus on Guitar) and also aired during several of Vic's European solo jaunts in the early 2000's. Nathan finally came full circle when it was last performed with The Undertow Orchestra in Athens, in 2006. Each version as good as the last.

It's a masterpiece of songwriting and worthy a revisit of you haven't listened to it in a while. A 'quality song' as Vic called it.

The great grandfather with his pious beard
Bathed in the river, all his years
Many books, that lined his walls
Jews and gentiles, held him in awe

He had four sons, all healthy and proper
One was converted, became a christian doctor
His daughter filled with typhus and succumbed
He grew quiet his wife fell dumb

His granddaughter recalled, the day he died
She was six years old, frosted with fright
She clutched the toe, the stiff cold toe
And renounced the wrongs only she could know

And the complete performance from 'Speed Racer" (Unreleased) (NOTE: Not the greatest fidelity)

And finally the last known performance with the Undertow Orchestra, from Athens, February 8th, 2006

Posted by Charles Fontaine at 3:33 PM