Panic Pure is one of Vic's most widely regarded compositions, and rightfully so. It's beautiful, haunting, nostalgic, candid, and includes some of Vic's most direct lyrical output.

The song was written after Vic attended an Augusta workshop in Elkins, West Virginia. The workshop focused on folk arts and artists. He had been nominated, by some of his friends, to partake in the songwriting part of the workshop. One night after a session, Vic rolled down a large hill, got drunk, and then proceeded to crawl back up the hill to his van, which was parked on the street. The song apparently was formed during that "Sisyphus-ian" journey. Vic ended up sleeping in his wheelchair, in the van, on it's hydraulic lift, and when he awoke the next morning, he had this song.

I absolutely adore every aspect of this song...the atmosphere, the tone, the low drone of the cello, the lyrics and the vocals (which are superb.) Apparently, Vic recorded them in one take, surrounded by candlelight, after a long day in the studio. Jem Cohen (who was present filming the documentary "Speed Racer...Welcome to the World of Vic Chesnutt") described it as "hearing dusk itself turn into sound." I concur.

The first person narrative of the lyric focuses on Vic's personality..reckless, naive, reflective and scarred. However unapologetic the words may be, Vic's statement feels comfortable and familiar to me, and perhaps is why I am drawn to it.

During a recent NPR special, Terri Gross asked Michael Stipe, Jem Cohen and Guy Picciotto (from Fugazi) about what their favorite Vic songs were. Both Michael and Jem listed "Panic Pure." Here's a transcript:

GROSS: Today's show is a memorial for songwriter and singer Vic Chesnutt, who died on Christmas Day, taking his life with an overdose of his prescription muscle relaxers. My guests are three of his close friends: Michael Stipe of R.E.M., guitarist Guy Picciotto, cofounder of Fugazi, and filmmaker Jem Cohen. When we left off, I had asked them for their favorite Chesnutt songs. Jem Cohen's choice is one that Michael Stipe just mentioned, "Panic Pure."
Mr. COHEN: In "Panic Pure," I think in a way it's germane to this whole conversation because in that song, you know, you see this balance of light and darkness and also this kind of declaration of his own complexity. You know, he says, and so all you observers in your scrutiny, don't count my scars like tree rings. My jigsaw disposition, its piecemeal properties are either smoked or honey-cured by the panic pure.
Mr. STIPE: Aye aye aye.
Mr. COHEN: It's hard...
Mr. STIPE: It's amazing.
Mr. COHEN: Yeah. It's hard to get through it because it's so heavy, but it's also, it's just such beautiful weird words, you know. And again, I think that he was always coming around to saying yeah, there's this panic pure in me but that's not the only force. There's also all of this other curiosity, and all of this other drive, and all of this other intelligence. And I just can't believe that he pushed as far as he did, you know, and kept delivering, you know?
Another reason for my fascination with this song comes from one of my proudest moments. After graduating from college (where I received a BFA in printmaking), I spend a long time not being creative. For whatever reason, my thought process had been stifled, and my output was zero. Around 1996, I had been listening to and absorbing West of Rome on a daily basis. It struck a chord with me, during that period, and specifically "Panic Pure" had such resonance.

One evening, while listening to the album on repeat, I felt inspired to create my first 'real' painting, as an artist.... not a student. It was entitled 'Panic Pure' and was directly influenced by that song. Several years later, I had the desire to give that painting to Vic, as a thank you for inspiring me. He graciously accepted it and hung it over his fireplace, where it still hangs. I've always been proud of the fact that he was enjoyed it enough to displayed it in such a place of honor. The painting is below.

This song will forever epitomize Vic's personality, his talent and his musical ability, for me. Even after the countless number of times I listen to it, something fresh and new always reveals itself to me. That is what makes a good song. 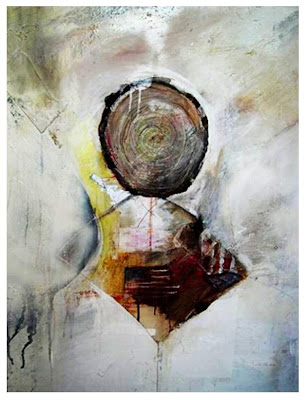 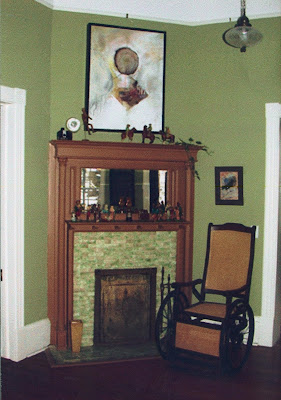 And on display in Vic's home.

And a solo live version by Vic:

and so all you observers in your scrutiny
don't count my scars like tree rings
my jigsaw disposition, it's piecemeal properties
are either smoked or honey cured
by the panic pure
Posted by Charles Fontaine at 3:02 PM