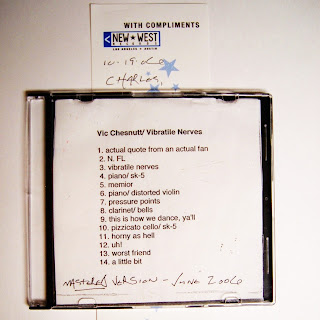 I listen to this album often. Apart from the experimental, home recordings there are a few gorgeous instrumentals, that would be best suited as soundtrack material, rather than filler. I wish that Vic would have had the chance to do something with this album. He had mentioned to me once about making a vinyl only release of some of the tracks. That would have been nice. Hopefully, it will see the light of day, sometime in the future.
"Vibratile Nerves" is a good example of the tone of the album. It's experimental, melodic, and includes some pre-Darkside Floyd keyboards. The voice is altered, distorted and creative. Lyrically, it's very enigmatic and the overall feel is spacey and airy. A far cry from the original acoustic versions that Vic performed live in 2005.

The song did get an 'official' release as a download on the website 'emusic', as well as on a SXSW Music promotional sampler that New West released in 2006. Both of these releases confirmed that the proposed album would in fact be titled "Distortion Pedals." One can only surmise that an official release would have been evident if Vic hadn't been dropped. 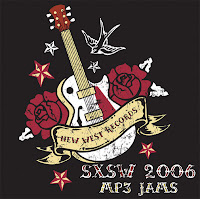 And the live version:

The years roll like a velvet millstone
That grinds us... but is still somehow sexy