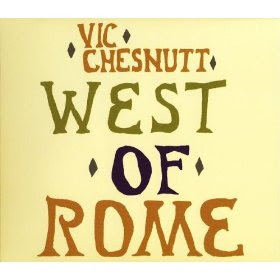 One of my all time favorite Vic memories revolves around a show in Knoxville, TN in October 2004. I had arrived to the venue early, and Vic and Tina (his wife) invited me to hang out with them before the show. The three of us sat around for a couple of hours, caught up on life and just chilled. During that time, Vic decided that they needed to prepare the set list for that night's show. Tina was playing bass with Vic for that show, and they had a handful of lyric sheets with them...each of them in Vic's scrawled handwriting, with chord references and music addendum scribbled among the pages. I was awestruck. Here were the actual lyric sheets for a ton of my favorite songs ever...in the original handwriting, in the possession of the man who wrote them . Amazes me still.

Anyway, so while they were contemplating over the nights play lists, Vic would ask my opinion from time to time. Of course, I was biased and sad that I loved them all. One song in particular though I had direct influence on. Tina had pulled out the lyrics to "Soggy Tongues', and Vic said that he didn't know if they could play it. He said it had been too long, and indeed he may had been right. The last documented performance was from around 1992. Anyway, I interjected that I really would like to hear that song and since up to that point, the set list seemed to revolve around songs from Vic's first four albums (which were just reissued on New West), that it fit perfectly into theme of the evening. They mulled it over for a second, and then agreed. Vic was always like that, at least to me. He was inviting and generous and I will cherish those memories and experiences.

The performance of 'Soggy Tongues' from that night was far from perfect (and I've included it below for your enjoyment). It was, however, such a treat to hear... not only because of the song's rarity, but also because of Vic's banter onstage as the song's quick collapse, after just a few measures. His prophetic divorce joke notwithstanding, the recording perfectly displays Vic's sense of humor, stage presence, and ability to reel in the crowd, even during an awkward performance like this.

The original studio version was released on 'West Of Rome', or as Vic called it, his "second squirt"...or his "sophomore slough." That album is widely hailed as one of Vic's best, if not THE best. The song is his retelling on the events immediately surrounding his marriage to Tina... a ceremony which, incidentally took place at the counter in 'Rip Griffin's World's Largest Truck stop', just outside of Dallas, TX.

From the documentary 'Speed Racer- Welcome To The World Of Vic Chesnutt', by Peter Sillen...

"Tina and I got married, and we came back to Athens after I lived in California for a while. And, oh the stories where a flyin' about, you know, what the deal was. Everybody was like, um, all mad that we got married or something? I don't know what the deal was? But there was like the sordid little theory mill, and little rumors were going crazy about what the, you know, because the various involvements or something, ya know? Athens is a small town, you know, everybody is involved with everybody. So, anyway, I wrote 'Soggy Tongues' in about five minutes,and it's um, the perfect summation of us gettin' married."

Musically, the song has an 'airy' production, quality vocals, and benefits greatly from some staccato strings (aptly performed by Vic's young nieces- Liz and Mandi Durrett.) Arranged (or heard) and produced by Michael Stipe, 'Soggy Tongues' is very melodic and Vic's inflections, with his unique drawl and elongation of phrases, is at a pinnacle here. All in all, not too bad for a song which was defiantly written in about five minutes.

Here's the live version that I referenced. (Warning: Explicit content)


And the studio...
Soggy Tongues
narrowed eyes and soggy tongues
beautiful rumors are flying about the ugly ones
the girl she is by the pool
yellow journalists' jewel
and all those wagging fingers are silly little stingers
rabbits are cooking breakfast
the fog is fragrant
the girl she is waking up against the famous vagrant
the cool council is tallying fines to be levied
the girl she is tightly grinning
the vagrant thinks it's all too heavy
presents are presented and bribes reluctantly taken
summer's sweetie iced a cohort while the rest of the town was baking
traffic is light and appetites are hearty and tongues are soggy
accusations are tossed like darts
at the good little girl who is groggy
Posted by Charles Fontaine at 12:39 PM