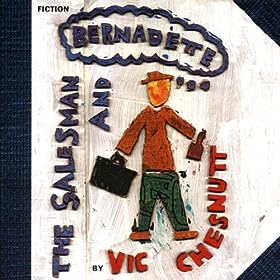 'The Salesman and Bernadette' is my all time favorite Vic album. In fact, I find it nearly perfect. The songwriting is exquisite, the story is fluid and the music, which is supplied by Nashville's avant garde country band Lambchop, has such a layering and texture to it, that the resulting compositions are a perfect compliment to Vic's "lovely story of loss and longing and sloppy satori."

The stories on this album are varied. They were all written during different times in Vic's career. In fact, the song 'Bernadette and her Crowd' dates back to Vic's first recording session back in 1988. 'Old Hotel' is also an older song. Despite that fact, the assemblage of these songs together, to create a motif, works very well, and the resulting album is a masterpiece.

Of all the great songs on this album, 'Square Room' is my favorite. It is, by no means, a happy song, but it has such a strong emotion to it, that the listener can't help but be drawn in. The earliest performances that I have date back to 1996, two years before the album's release. That version, which I've included below, is a little more up tempo and doesn't contain the turn around segment at the end, in which Vic (or in this case 'The Salesman') is questioning the doings of his life.
Lyrically, it revolves around the solitude, alienation and loneliness that encompasses the life of an alcoholic. The protagonist in the song is alone. His separation appears to be not of his own making, and he is depressed, reflective, and pines for his rustic home. His only desire is to drink himself to death, or at least to ponder that idea. It's a very sad tale of despair, dependency and isolation.

I can't help but listen to it and think of it as Vic's tale. He travelled a lot, battled his own alcoholic demons, and being from rural Georgia, it's very likely that he pined for the country side on more than one occasion. Add to that his own personal struggle with success, and talent, he may have just viewed himself as a pathetic drunkard, whose only comfort in life would be to leave it.

Whether this song is just a character study or not, the circumstances that surrounded Vic's life, make it a poignant, albeit difficult song to wrap one's mind around. I choose to embrace it because to me, it feels like a Vic song. Its emotional, well crafted and highlights Vic's uncanny ability at word play.

Here's the short live version from 1996:

And an a very moving live version from 2003:

EDIT: Here's the version (with Old Hotel) from Rote Fabrick, with Lambchop, that Ivan referenced:

why do I insist on drinking myself to the grave?
why do I dream about cozy coffin?
I had all these plans of great things to accomplish
but I end up purely pathetic more than often

Posted by Charles Fontaine at 5:32 PM