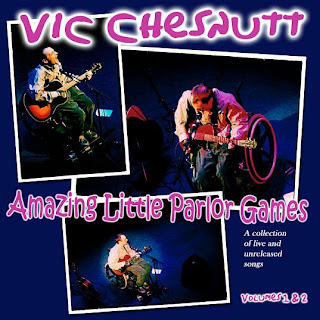 Several years ago, I started a project to compile and collate songs that Vic had performed live, but never recorded or released. That collection is called "Amazing Little Parlor Games" and, as of this blog, is in it's seventh volume...with an eighth soon to be released. So far, a total of 110 songs have been put out for mass consumption due to this project. Vic himself was very pleased with the idea, and often asked for copies.
Some of these songs actually ended up being recorded for subsequent studio releases. In fact, whenever Vic would release a new album, it inevitably would have a song that was on a previous volume of "Parlor Games." All total, around twenty songs from those compilations made their way onto an album. Coincidence, or not...I was always thrilled when that happened. Vic did used to joke that often got song titles wrong (and I did), and this song was no exception.
I initially had titled it 'Party Potential' when it was put on Volume Two. I've since been told that it is called 'Unlike Joni Mitchell'. It was recorded in Madison, WI, in April of 1999, on a tour that had Vic opening solo for the band Wilco.
I like this recording for two reasons. First, it captures Vic stage presence in a very accurate way. He was always tried to be humorous, and self deprecating, regardless of the crowd or the venue. His charm and wit are very evident here. Secondly, the song, is an unapologetic, open letter, if you will, and Vic's word choices are very forward and telling, and the phrasing is very much his.
Take for example the line, "But you never knew the sciences, and you hardly ever touched the tools...except for those funny weapons used defending your honor in roommate duels."
I also love how the antagonist is basically called out for her behavior, and told...you're out..."you've reached your party potential....unlike Joni Mitchell."
Vic doesn't do that sparingly or with kid gloves. He is very direct and to the point. However venomous and tactless, Vic has succeeded in writing a song that expresses, what would be predictably, an uncomfortable conversation with an elegant beauty...and a sour tongue.
Cover art created for this project by Franck Périgny. Examples which can be viewed here:
http://jediroller.free.fr/en/cdcovers/vc2.htm
On a side note, and for the sake of accuracy, this song did get an official release, sort of. A live version did appear on a compilation entitled 'Live at the Lobby: A Collection Of Bands Playing Live at 90.5 FM WUOG, Athens, Ga' That version was recorded
in September of 1998. It was such a rarity, and wasn't an official Vic release that I still consider it largely unreleased.

for one season, it was raining boys
and you quickly blew through some
as you searched for your Svengali
I guess you never ever tasted of one